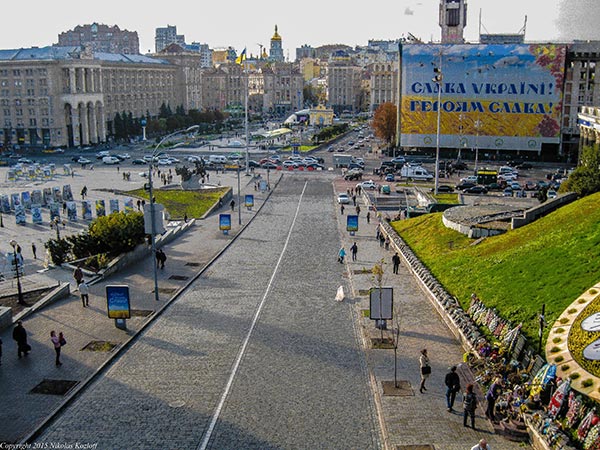 To the extent that the mainstream media cover Ukraine at all, they tend to frame Kiev’s conflict with Kremlin-backed Russian separatists as a zero-sum game pitting Vladimir Putin against the U.S. and its Western allies. Yet beneath all the wonky geopolitical chatter, Ukraine’s independent left — which must be distinguished from the old guard communist left — is pushing its own political agenda. How can such forces overcome right-wing nationalism, particularly in the midst of deadly military conflict in the country’s eastern regions? It’s a tall order, since many remain focused on repelling separatist aggression rather than attending to urgent social needs.

While many would certainly welcome an enduring ceasefire, recent developments suggest that peace may still be a long way off. Indeed, though a framework peace deal was announced in September, the settlement has not been observed on the ground and to date 4,700 people have died in the conflict. During talks held in Minsk, meanwhile, Ukraine and separatist rebels failed to reach agreement on troop withdrawals or aid. What is more, the Ukrainian parliament recently voted to join NATO, a move which has not gone down well in Moscow.

So just how is the independent left in Ukraine coping with the nationalist mood? For answers, I catch up with Denis Gorbach, an activist who helped co-found the Autonomous Workers’ Union, an anarcho-syndicalist group which models itself after the American I.W.W. or Industrial Workers’ of the World (“Wobblies”). The outfit, which hopes to encourage industrial struggle in the workplace, is comprised of former students, IT specialists, journalists, artists, designers and a few workers. Gorbach estimates that the Autonomous Workers’ Union, which is based in Kiev and the eastern city of Kharkiv, has about 40 members.

Gorbach frankly admits the current political milieu is a daunting one, as civil society is “weak and atomized” and simply resigned to patriotism and nationalism. “Right now,” he remarks, “if you protest the government you run the risk of being perceived as a [Russian] fifth column.” In the wake of protests in Maidan Square which toppled the unpopular government of Viktor Yanukovych last year, Gorbach entertained hopes that demonstrations would continue and the public would reject neo-liberal economic austerity measures. Unfortunately, he remarks, “the war with Russia has negated such aspirations” by diverting valuable attention from social issues.

Gorbach is concerned that a rising tide of nationalism may bring undesirable consequences for the left. Indeed, he adds, right wing street violence is a real concern yet the public doesn’t seem to attach much importance to such developments. Gorbach fears the climate could become even worse when right wing fighters acquire military expertise in the east and later return to Kiev fully trained and equipped. One voluntary outfit, the Azov Battalion, even sports military insignia associated with Nazi Germany. “They don’t hide this stuff,” Gorbach says, “and the wider society just thinks ‘well they’re patriots and we don’t see any problem with this.'”

Vadym Gud is a veteran of Direct Action, a local student labor union, and participated in protests at Maidan Square. He says right wing battalions are on rotation and come back home periodically. Like Gorbach, Gud shares a concern about right wing violence. Once, he remarks, whilst he was working with Direct Action, he was attacked by street thugs in a café. Though the attack wasn’t so serious — Gud was punched from behind — some of the activist’s colleagues have been attacked on the street and even sent to hospital. The problem, he says, is that “most right wingers do not divide leftists into neat and separate groups. For them, everyone is Communist, Bolshevik and anti-Ukrainian. Therefore, ‘you must be pro-Russian and we’re coming after you.'”

Like Gud, Natalia Neshevets is concerned about right wing violence. A leftist activist, Neshevets also gained valuable political experience through her work with Direct Action. During protests at Maidan square, she and her colleagues campaigned for progressive reform including free transportation and education. It wasn’t long, however, before rightist street thugs attacked them, grabbing anarchist flags and crushing them. Neshevets says the attacks continued every day, yet the media failed to take the incidents seriously. “When we reported it,” she says, “journalists would say ‘oh it’s just your left-right clashes, we’re not interested in that.'”

Putting up with street violence is difficult enough, though the left may face additional challenges. Indeed, the war with Russian separatists has actually siphoned off experienced political veterans and activists. Neshevets explains that a few anarchists have enlisted in volunteer units and gone off to fight the rebels. “I am truly against participating in the conflict,” Neshevets remarks, “and it’s strange for me when leftists take on patriotic positions.” Nevertheless, she adds, “some activists see the war as a protective measure in response to direct Russian aggression.” Most activists who enlist are men, Neshevets declares, and they tend to argue that “it’s important to stand with the common people and not just be elitists.”

Perhaps, if war had not erupted between Kiev and eastern separatists, the Ukrainian and Russian independent left might have consolidated greater cross-border ties. Escalating military conflict, however, has raised questions about such efforts and led to concern amongst local activists. “I have lots of friends and contacts in Russia,” says Neshevets. “I don’t want a war, because for three years I’ve been coming and going between Kiev and St. Petersburg. I have a strong love for the Russian people, but not for politicians.”

Denis Pilash is another left veteran of the Maidan who, like Neshevets, cut his teeth whilst working for Direct Action student labor union. He says that in many ways, political dynamics within Russia mirror familiar patterns within Ukraine. “Right now,” Pilash remarks, “Ukraine and Russia are in an open competition to see which is worst for the left. In terms of neo-liberal reform, Russia is far ahead of Ukraine and has gone a lot farther in destroying the social compact since the fall of the Soviet Union.”

Just as governing elites in Kiev have used the war to consolidate internal power, Vladimir Putin has managed to distract the public from economic and social problems by meddling in the Crimea and Donbass region. It’s highly ironic, Pilash says, that Putin is enjoying sky high approval ratings yet “people are disappointed in their quality of life, inadequate social services and poverty.”

Even though Russia is a much larger country than Ukraine, Pilash says the independent left there only numbers about 1,000 people, mainly based in Moscow, St. Petersburg and some other industrial centers. The new left movement, consisting of socialists and anarchists, is trying to link up with local trade unions so as to encourage workers’ protest. Pilash says the independent left in Russia confronts a number of problems. Perhaps, the left can broaden its political base by including a wider coalition of people, yet such notions may stir controversy since more moderate anti-Putin forces espouse pro-market positions.

Another difficulty has to do with sheer fear and the overall political climate within the country. Indeed, political organizing on the left circuit in Russia is even more dangerous than being an activist in Ukraine, which likewise may carry a degree of risk. Pilash paints a dark picture of political life in Russia, remarking that local fascists and neo-Nazis have killed dozens of anti-fascists, including not just activists but even lawyers such as Stanislav Markelov.

In 2009, Markelov was brazenly shot in the head on a busy Moscow street. He and another trainee journalist, who was also killed in the attack, worked for a local newspaper, Novaya Gazeta. Before he was shot, Markelov prosecuted neo-Nazis and represented the family of a young Chechen woman who had been murdered and raped by a Russian colonel. In 2011, an extreme nationalist was sentenced to life in prison for the crime.

In addition, the new left in Russia faces internal schisms. Unfortunately, Pilash remarks, some leftists have become very anti-Ukrainian by buying into Kremlin rhetoric about the fascist threat in Kiev and the need to reclaim Russian territory. Pilash is particularly disappointed that Boris Kagarlitsky, a well known intellectual, has opted to join in the “nationalist chorus.” Kagarlitsky, Pilash says, frequently travels abroad and claims that Maidan was bourgeois while the new rebel republics in the east espouse more left wing politics. “A lot of people trust Kagarlitzsky,” Pilash declares, “and they repeat these lies. It’s too bad when you lose such people, who were known for their critical thinking.”

What, then, must happen to move forward with a new left agenda in the midst of war? The most important thing, Pilash says, is the complete and total removal of Vladimir Putin and his right wing authoritarian regime from the political landscape. In order to achieve that, however, the Russian left will have to secure the support of the working class, “which has become very apathetic. They have lost almost all hope for change, so they say ‘well, things were really bad in the 1990s but at least we’re not in the same boat now.'” Despite all these difficulties, Pilash maintains an upbeat and hopeful attitude. The Russian socialist movement, he says, has a very good agenda and Ukrainian activists “share the same principles and the same struggle.”