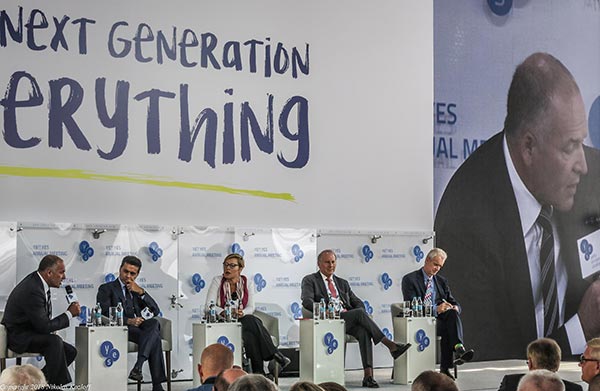 Champion of the underdog or pseudo-populist?  Ukrainian patriot or kowtowing to Russian interests?  Inheritor of Maidan’s legacy or channeling the oligarchs?  Love or hate her, Yulia Tymoshenko is one of the most controversial figures on Ukraine’s political scene and this grande dame will no doubt play a key role in the country’s upcoming presidential election next year.  What’s the truth behind all the hype, and is it possible to form a more sober and level-headed assessment of Tymoshenko and what she represents?  In order to address such questions, I spoke to a number of experts and observers in Kyiv late last year.

My first stop was a lavish meeting of the Yalta European Strategy (or YES) meeting in Kyiv (pictured above), which is organized by wealth magnate Viktor Pinchuk and draws together hundreds of elite politicians, economists, experts and business leaders.  Ukraine’s respective presidential candidates are in the midst of a high stakes game to demonstrate their western bona fides and reformist, Maidan credentials.  Speaking at Kyiv’s grand Mystetlyk Arsenal museum, Tymoshenko said she would not compromise Ukraine’s borders or tolerate any form of Russian control.  Glancing around the audience, I observed that many young people of the Maidan generation regarded Tymoshenko warily and only provided tepid applause.

Though opinion polls suggest the presidential election is wide open, it would seem Tymoshenko of the Batkivshchyna party is the front-runner.  Though she retains very high negative ratings, Tymoshenko is a veteran political operator and maintains an effective grassroots operation.  In a large field of candidates, Tymoshenko is likely to break through the first round of voting, and would likely vanquish Petro Poroshenko in the second round.  On the other hand, if public opinion polls can be believed, the Ukrainian people are highly apathetic toward not just Tymoshenko but the entire political system, with up to thirty percent of people reporting they do not plan to vote at all.

The upcoming presidential election will likely center on three main issues: war in the east, fight against corruption and overall social-economic welfare of the Ukrainian people.  Though she has not gone along with Ukraine’s rightward political drift, Tymoshenko is a chameleon of sorts and slightly difficult to pin down.  Though she has sought out the political center, she is also a frequent critic of “neo-liberal” economic reforms.  In other respects, she has sought to cast herself as the logical heir to Maidan’s legacy by embracing anti-corruption drives and a Euro-Atlantic trajectory.  But despite such forward-sounding positions, some see Tymoshenko as part of the same old oligarchic system.

Inside and Outside YES

Notwithstanding such public cynicism, Vasyl Filipchuk took Tymoshenko’s side.  A former diplomat and senior adviser at Kyiv think tank International Center for Policy Studies, he believes Tymoshenko has attracted new faces and a new generation of politicians to her party.  Speaking to me on the margins of YES, Filipchuk remarked that Tymoshenko has sought to engage civil society in the spirit of Maidan.  Furthermore, the veteran politician has organized some roundtables on constitutional reform.  “I took up this issue in 2014,” Filipchuk declared, “and I was disappointed that no one followed up.  On the other hand, she is doing precisely that.”

The grande dame has been linked to Russian interests, an accusation which can certainly represent the kiss of death in the present political milieu.  And yet, Filipchuk noted, there’s no proof of such “fake news” allegations which can ultimately prove to be dangerous.  Imagine a scenario, the expert remarked, in which Tymoshenko won the election and yet her opponents framed her as a Russian stooge?

To get the contrasting “mood on the street,” I caught up with Gennady Kanishchenko outside the YES conference.  I originally met Kanishchenko in 2016 at his café, Bar Baraban.  Located just a stone’s throw away from Maidan square, the bar was festooned with miscellaneous graffiti ranging from Che Guevara to Ukraine’s Right Sektor.  For years, the watering hole served as a gathering place for journalists and reform-minded folk but recently, Kanishchenko was forced to close Baraban due to rising rents.

If Tymoshenko ever became president, the bar owner told me, this would be a “tragedy” for Ukraine as many believe the politician represents the oligarchs.  What’s more, Kanishchenko explains that when she was Prime Minister, Tymoshenko signed an agreement with Gazprom on very unfavorable economic terms for Ukraine.  “This was a total waste,” Kanishchenko adds, “and so even if she’s not pro-Russian, she’s just stupid.”  Moving to the present, Kanishchenko said “before, all her billboards promoted peace through compromise.”  But then, when Poroshenko came out with a very strong speech about the need to counter Russian aggression and restore the Ukrainian language, Tymoshenko changed her billboards to reflect a more pro-NATO stance.

In the long-run, however, it would behoove Tymoshenko to stay in the moderate political center.  That, at least, is the impression I got when speaking to Olexiy Yakubin, a senior lecturer in political science at Kyiv Polytechnic Institute.  Though Poroshenko started out in 2014 as a centrist candidate, he has now moved to the right through his nationalist harping on language and religion.  As a result, Poroshenko might lose more centrist, moderate Russian-speaking voters “who will probably be partial to candidates who are ready to compromise with Russia on Donbas and Crimea.”  Though Ukraine has turned toward the right, Poroshenko may go down in flames since the country has never elected an ultra-nationalist to the presidency.

Despite the fact that Tymoshenko enjoys support in central and western Ukraine, she must expand her base in the more Russian-speaking east.  But here too, she must perform a delicate balancing act: the grande dame, Yakubin points out, has a negative image in the west which goes back to her signing of the Gazprom deal.  Such views of Tymoshenko are a little “stereotypical,” the professor remarked, adding “I would not say she is directly connected to Russia.”  Moreover, most candidates will probably attempt to reach an agreement with Moscow one way or the other.  If anything, the Kremlin may paradoxically seek to promote the Ukrainian far right which could sow political discord.

But even if Yakubin is correct and Tymoshenko’s ties to Russia have been exaggerated, what about the dark influence of oligarchs?  If Tymoshenko wants to be taken seriously as the heir to Maidan, she must jettison such ties though predictably Ukraine’s power players are bound to play a role in the election.  There’s Rinat Akhmetov, for example, who is ready to work with Poroshenko though the oligarch could just as easily ally to Tymoshenko.  Meanwhile, fellow oligarch Igor Kolomoisky has already voiced support for the grande dame.  Viktor Pinchuk is similarly ready to work with Tymoshenko but “tries to maintain political ties with everyone.”  In general, Yakubin declared, the oligarchs are skilled at “placing their eggs in different baskets.”

While oligarchs seek to preserve their privileges and the status quo, they’re not beyond supporting populists.  Out in the rural hinterland and small villages, Tymoshenko may find herself enmeshed in a populist battle with Oleh Lyashko of the Radical Party.  Indeed, both contenders have a similar social base, and may compete for votes here.  According to Yakubin, Akhmetov is “actively working” with Lyashko even as he ponders supporting rival candidates.

Personally, the professor stated he didn’t believe populism was a bad thing though demagoguery was another matter.  In any election, certain politicians will employ rhetoric which appeals to the oppressed, but the real question is whether Tymoshenko’s populism can be taken seriously.  Because there are no viable leftist political parties in Ukraine, Tymoshenko has been able to absorb leftist or populist ideas by criticizing the International Monetary Fund and social cuts to the public sector.

What does Maidan’s youthful progressive left circuit think of Tymoshenko appropriating their own rhetoric?  Denis Pilash, a veteran of Maidan protest and a co-editor of Commons Journal, told me outside YES that “Tymoshenko talks about poverty and rising prices, but she has no major political philosophy behind her.”  Rather bleakly, Pilash added that Tymoshenko doesn’t represent a “viable alternative” but many people may wind up supporting her anyway because they believe “better her than a continuation of harsh neo-liberal austerity.”

But even with all these drawbacks, wouldn’t Tymoshenko represent a switch from the same old male-dominated politics which is so prevalent at forums such as YES?  Speaking to Filipchuk, I got the impression that Tymoshenko is hardly pushing a feminist agenda.  “She embodies the view of a protective mother,” he told me, which is reassuring to many who have been buffeted by Ukraine’s deplorable economic situation.  “My mother plans to vote for Yulia,” the expert added, “because she thinks that under Tymoshenko’s leadership, the state will pay more attention to her.”

Perhaps, Tymoshenko’s failure to push a feminist agenda isn’t so surprising in light of wider politics.  According to Yakubin, there isn’t a very pronounced movement for women’s rights, so the grande dame may seek to merely position herself as “man in a skirt” by promoting a macho image.  Marta Tchumalo, a psychologist and deputy chair of Women’s Perspectives, an NGO in the western city of Lviv, seemed to echo such sentiments.  Speaking to me at the group’s offices, she remarked, “Tymoshenko has strongly distanced herself from feminist and women’s organizations.  She communicates very carefully and even stated publicly that she is traditional and not a feminist.”

Highly controversial and polarizing, Tymoshenko is not likely to break much electoral ground with those who have long reviled her.  But with cynicism and apathy in the political system running at an all-time high, this chameleon and ultimate survivor may emerge as the last candidate standing.